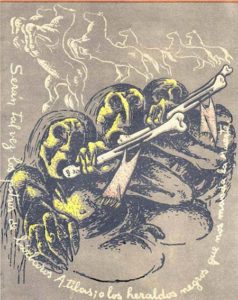 THE BLACK HERALDS
A protest for the killing of George Floyd

There are blows in life, so hard . . . I don’t know! Blows like the hate
of God; as if before them, the undertow of everything suffered is
embedded in the soul . . .I don’t know!

They are few; but they exist . . . They open dark furrows in the fiercest
face and on the strongest back. Perhaps they are the foals of barbaric
Attilas; or the black heralds sent to us by Death.

They are the deep falls of the Christs of the soul, of some adorable faith,
blasphemed by Destiny. Those bloody blows are the crackling of
some bread that burns at the oven door.

And the man . . . the poor, the poor man! He turns his eyes, as when a
slap on the shoulder summons us; he turns his crazed eyes, and
all that he has lived wells up, like a pool of guilt in his gaze.

From: The Black Heralds