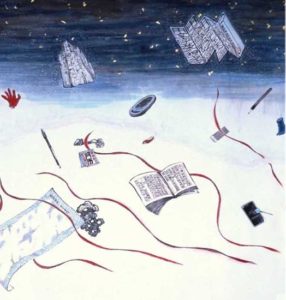 The door of truth was open,
but let only half a person
pass at a time.

Thus, it was not possible to reach the whole truth,
because the half person who entered
brought only the shape of half the truth.

And its second half
also returned with half a profile.
And the two halves did not match.

They blasted the door. They knocked it down.
They arrived at a luminous place
where truth radiated its flames.
It was divided into two halves,
different one from the other.

Each half argued which was more beautiful.
None of the two was completely beautiful.
But how hard to decide. Each chose
according to his whim, his illusion, his myopia.